Harvest season began on 16th February 2021 at Ernie Els, a little later than they had initially anticipated. Summer was relatively short and cooler than usual, not necessarily a negative factor for grape growing.

‘In the vineyard, the cooler summer allowed us to stay on top of our canopy management with less need for irrigation. The berry sizes are nice and small, keeping the wine concentrated, as is our preferred style.’ Viticulturist, Leander Koekemoer

After a somewhat shorter summer, autumn arrived quickly and the subsequent days during harvest were cooler than usual, making the harvest period much longer. Together with other South African producers, they had to pause harvesting to allow for a few days of heavy rainfall to pass before harvest could be resumed again.

Winemaker Louis Strydom has described this harvest season as ‘a vintage with two halves’ as it felt like two separate harvest periods. ‘80mm of rainfall on the 10th and 11th March brought the harvest to a screeching halt for two weeks. However, we were able to proceed once the weather had settled and we are happy with what we are tasting in the cellar.’

2021 will be memorable to Ernie Els as it is the first season in their new cellar. They are experimenting with different techniques this year by making use of amphorae and concrete tanks, which will give a slower, more even fermentation. For now, the wines are resting and the team is looking forward to tasting them once they have undergone their maturation process. 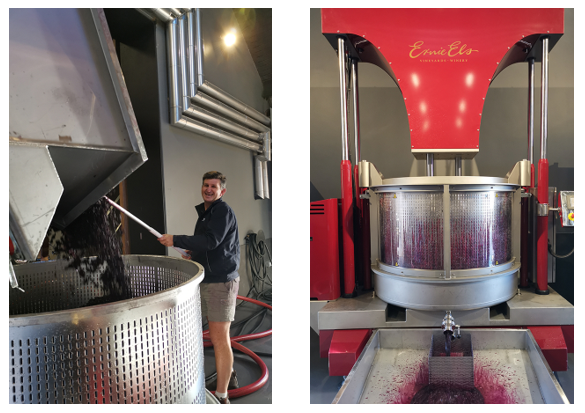